skip to main | skip to sidebar

Okay y'all. My twitter peeps are encouraging me to take a mental health day tomorrow. I want a broader range of opinions. Here are the details:
1. I want to take the day off to go to Starbucks and while away the day with a sweet coffee drink and my knitting.
2. The day off won't really help my mental health (though my mental health HAS been a bit off lately).
3. The one piece of my job that I absolutely MUST DO tomorrow requires about 40 seconds and
can be done from my laptop.
4. If I am NOT at work tomorrow, there will only be two people in the office.
5. Neither one of the people who will be in the office normally works until 5, so one of them would unexpectedly have to stay late.
6. I willingly do my part to pitch in when others are out of the office.
7. But I feel like I do more taking-of-time-off than my most analogous colleague, who is the one who more likely would be the one to have to stay late.
8. So taking the day off is an imposition on my coworkers.

Given all these factors, what say you? Okay to take the day off, or inappropriate taking advantage of coworkers?

A lot has happened in the last two months since my last post. Here are the bullet points:

*I did not give Odessa sufficient money for ALL the extras for prom. I gave her some money and told her that I would give her more if she showed she was able to be home by curfew and respected me as more than just a source of money. She understood that (she repeated it back to me last night) but did not do what I asked.
**When we worked out her allowance, getting nails done was added as a semi-regular expense that she could save up for. So actually, it isn't :-)
***The last bit is because pre-Odessa I rarely carried cash with me. I try to remember to go to the ATM before Sunday morning allowance time, but don't always remember. And if there's something she needs money for in the middle of the week, chances are good I'm making a trip to the ATM.

Odessa is going! Next year! To the four year school she wants to go to!

I'm a little befuddled by the May 26th acceptance, but I'll take it. I am super proud of and excited for her.

Now, if she could only figure out how to get home by curfew...

Odessa isn't late for curfew every night. Just every night that she leaves the house.*

I have tried "if you are a half hour late for curfew, your curfew is a half hour earlier for the next week," but she just doesn't go out then.

I've considered charging her money (that's a way to get a teenager's attention!) because when she is late for curfew, I stay up worrying, and it affects my time and my work. I haven't actually done this.

And then last night she was almost three hours late for curfew. Her phone battery was (almost) dead, she had no cash, our subways stop running at midnight, I felt like crap on a cracker, and she hadn't told me where she was until I got in touch with her after she had already missed curfew. I was completely overcome with worry.

So I am going to do two things. The first is probably a terrible idea but I need to do something. (By the way, she also was late for curfew on Sunday. It was because she was babysitting her niece and couldn't find her brother to drop her niece off--not really her fault.) I am going to make her write sentences. To be completely honest, if I hadn't seen on blogs that some other foster and adoptive parents use this with their children, I would have thought the punishment went away with the '50s. She was 162 minutes late, so she will write "I will be home by curfew" 162 times. It would have been better for her to do it last night but she cursed at me and stormed off to her bedroom before I mentioned it, and, again, I felt like crap on a cracker.

The second is much more logical and appropriate for a teenager. Her senior trip is in 3 weeks. I've signed the permission slip for her to go, but not given the money yet. I want her to have the experience of going, but I don't know that I can trust her to make good decisions. So we are going to make a contract. It is going to involve being home by curfew (with exceptions for 1. if I've given her permission to be out later, and 2. a cumulative hour of leeway for slight delays in buses and such), not cursing at me, and completing chores that I ask her to do (which are few and far between, to be completely honest).


*In fairness, she went out on Tuesday after having ASKED permission, she called at 9 asking if she could go to her cousin's band practice, and when I said no, she was home by curfew.

The Status of my License

I made a decision last night. My foster care license expires sometime in September (ish). Odessa ought to have moved to some other situation by then, and I want to buy a house. I can't buy a house where I am now because I can't afford the houses in neighborhoods that are in walking distance to synagogues. I've done a grand total of 4 hours of my mandatory 30 hours of training. So I am going to let my license lapse, work on moving, work on my mental health and attachment issues, and then get licensed in a new state after I'm settled in my new home. I'm still here. Just announcing my intentions to the world. :-)

I'm looking for advice about parenting teenagers. This is framed within the specific context of eating dinner as a family but probably this is just a symptom of my broader not-knowing-what-I'm-doing-ness.

I don't (think I) have that many expectations, but one of the expectations that I have is that Odessa and I eat dinner together as a family. I stated this the first night Odessa lived with me and have brought it up at intervals (usually when I'm disappointed that Odessa hasn't come home for dinner) since then.

Two weeks ago Odessa complained about this expectation because it's not what she's used to and she thinks I'm "forcing" her to come home, and also when it get's nicer out, she's "not going to want to come inside." I told her I would think about it, but then I didn't say anything until she brought it up again. When she brought it up again last week, I offered her a compromise, that we could make a schedule of two nights a week that she could eat somewhere else. She didn't respond, and explicitly opted not to respond when I brought up the compromise the following day. I stated then that because she didn't respond, I would expect her to come home for dinner every night until she chooses to respond.

She was at her brother's for the weekend, came home yesterday and ate before I got home, and today went to her bedroom while I was cooking and told me she wasn't going to come out when I knocked on her door to let her know that dinner was ready.

I don't want to "punish" Odessa for not eating with me. I know that partly I need to adjust my expectations. But at the same time, I am frustrated because I come home to a television that is very loud, Odessa doesn't say hello to me, she (very teenagerly) responds to questions with at most one syllable... but she turns the TV off for dinner. I'm terrible at getting anything out of her about school (more than 2 questions and she snaps at me) and have almost no clue what's going on in her life; if I don't have 15 minutes at dinner I have nothing.

Breishit, or In the Beginning

This is your starting point if you've come to this blog in the middle.  Here are a few quick background posts:
My Welcome post, which tells a little bit about who I am and why I started this blog.
A glossary of all (or some) of the crazy Jewish terms I use.
A note On Anonymity, and Who We Are 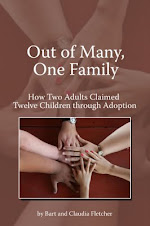